History of the Posters in San Francisco

While living at 584B Castro Street in the late ’60s, Todd became friends with Sebastian who lived in the next block. Sebastian was Bill Graham’s accountant. Bill Graham was the producer of the legendary Fillmore Auditorium rock concerts. Sebastian longed to be involved in entertainment promotion as well and secured the use of the Palace Theater at Columbus and Powell Streets from its Chinese owner on weekend nights after midnight.

His plan was to show some of his favorite little known, cult and bizarre films after midnight on weekends. The area (North Beach) held the perfect potential audience mix of beatniks, hippies, intellectuals and gays. He needed a way to advertise the monthly array of films. He asked Todd to work on an inexpensive handbill or mailer. They agreed on a larger poster format to be folded and mailed out. In those early days, Todd was paid with bags of weed.

The project was successful. The showings eventually became as famous for the audiences as for the unusual films that drew them. The press noticed and the ‘Midnight Movies’ began to be mentioned and commented on in the local press. Unique to these events was the wild and bejeweled nature of the generally unruly audiences.

The posters also developed a life of their own and could be found on the kitchen walls of hippies, freaks and gay men. As time passed and the success of the shows increased, the posters moved from single color on inexpensive white paper pen and ink drawings to multicolored and color separated images. They used mixed media and photographic images.

The Midnight Movies project expanded and grew. Sebastian began working with San Francisco Filmmaker Steven Arnold and they launched Nocturnal Dream Shows. The colorful audiences at the Palace Theater had become an ‘event’ themselves and one night, stoned hippy drag queens who had appeared in one of Arnold’s films, took the Palace stage and became The Cockettes.
John Waters, producer and filmmaker from the East Coast who had introduced ‘Lady Divine’ to the world, formed an alliance with Sebastian. Then ‘Divine’ shows in San Francisco and Divine posters and photographs by Todd happened. Tropo Productions, a vehicle for promoting rock artists signed with Warner Brothers Recording joined the party.

While all of this was happening, Todd worked on his master’s degree in sculpture at San Francisco State and showed his work at The Upper Market Street Gallery. He designed posters for their edgy art shows and events. The gallery was as well known for its communal owners Ron Jehu, Wylie Wong, Michael Radcliff and Baron Michael Miller as for their amazing gallery shows. Next door neighbors were Sylvester, by then, on the top of national disco music hits lists and John Rothermel. Here are some images from these outrageous days below: 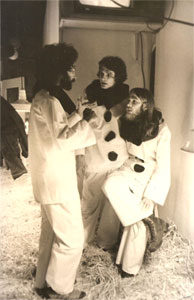 Serving Champagne at the opening of Todd’s one man masters show were Eugene Protopappas, Steven Smedley and Michael Dillon. The show’s theme was circus-like with straw on the floor and clown costumes created by Lenny Passalacqua: 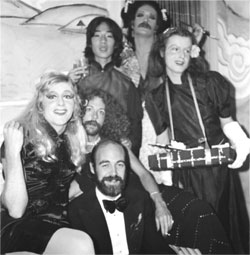 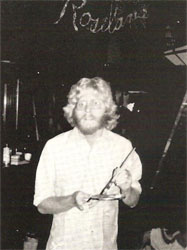 The Upper Market Street Gallery was contracted to design a complete Interior environment for The Midnight Sun bar on Castro Street every six months. Todd works on the Roseland Ballroom interior of that gay bar. 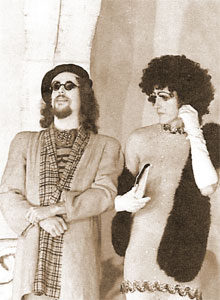 The one and only time Todd appeared on stage with the Cockettes was in their production of Hot Greeks at the Palace as a female professor of ethics with Martin Worman, left.